Silver Bullets by Elmer Mendoza, translated from the Spanish by Mark Fried; (c2008) Maclehose Press 2015
an exceptional, headspinning take on the classic hard-boiled detective story; 58 characters (I was grateful for the scorecard) populate the 200 pages of this blackly comic Mexican noir; stylistically interesting, contributes to the sense of chaos and uncertainty in a society ravaged by the corruption and violence of the drug trade

A World Beneath The Sands: The Golden Age Of Egyptology by Toby Wilkinson, Norton 2020
from the Rosetta stone to King Tut’s tomb; a lively account of the discoveries, personalities, and scholarship of Egyptology and the political/historical context of European rivalries and the developing Egyptian nationalism

Black Sea by Neal Ascherson, Jonathan Cape 1995
an extraordinary history of the whirlpool of peoples and cultures that is the Black Sea region; fascinating and disturbingly relevant

How To Talk About Books You Haven’t Read by Pierre Bayard, translated from the French by Jeffrey Mehlman; Bloomsbury 2007
witty, provocative, and thoughtful exploration of what we mean by “reading” and why we do it; a good discussion in book group where I was amused to learn that I was the only person who finished it (book group)

The Shadow of the Empire, A Judge Dee Investigation by Qiu Xiaolong; Severn House 2021
author of popular Inspector Chen series reworks one of Dee’s cases

The Emissary by TAWADA Yoko, translated from the Japanese by Margaret Mitsutami; (c2014) New Directions 2018
not your usual dystopia; poignant, funny, thoughtful

Small Things Like These by Claire Keegan, Grove Press 2021
novella asks if we can choose to be courageous and kind when it’s easier to look away

Malice by HIGASHINO Keigo, translated from the Japanese by Alexander O. Smith; (c1996) Minotaur Books 2014
a very clever puzzler and treat for fans of literary/psychological mysteries

Under The Midnight Sun by HIGASHINO Keigo, translated from the Japanese by Alexander O. Smith; (c1999) Minotaur Books 2016
extended, complex story of a crime and its aftermath

Velvet Was The Night by Silvia Moreno-Garcia, Del Ray 2021
seriously entertaining or entertainingly serious, take your pick; very interesting and enjoyable story of people caught up in the political turmoil of 1970’s Mexico City (book group)

The Window Trail by J J Rusz, 2018
“A Big Bend Country Mystery”; a nicely told story, appealing characters and excellent local color; a pleasure to read, especially while traveling in the Park

Silver Pebbles by Hansjorg Schneider, translated from the German by Mike Mitchell; (c2011) Bitter Lemon Prss 2022
drug deal diamonds go astray and are found by an unlikely couple on the margins of society

Fatale by Jean-Ptrick Manchette, translated from the French by Donald Nicholson-Smith; (c1977) NYRB 2011
very dark noir from the great French crime novelist; opening scene of hunters “…hunting for a good three hours and still had not killed anything. Everyone was frustrated and crotchety.” There will be plenty of killing with a cold edge of black comedy.

Eight Dogs or Hakkenden, Part One of An Ill-Considered Jest by BAKIN Kyokutei, translated from the Japanese by Glynne Walley; Cornell University Press 2021
wonderfully entertaining saga with elements of adventure, fantasy, folklore and historical romance

From the Holy Mountain, A Journey In The Shadow Of Byzantium by William Dalrymple, HarperCollins 1997
the author’s courage, scholarship, humor and humanity are all evident in this modern classic of travel writing; it’s an absolutely wonderful, engrossing account of an extraordinary journey to discover the survivals, physical and cultural, of the Byzantine world in the contemporary Middle East

The Aosawa Murders by ONDA Riku, translated from the Japanese by Alison Watts; (c2005) Bitter Lemon Press 2020
a painstaking reinvestigation of a shocking murder builds surprising tension and horror

Afterlives by Abdulrazak Gurnah, Bloomsbury 2020
seemingly effortless classic storytelling; the flow of a hundred years of history and politics seen through the ordinary lives of an Arican town (book group)

Augustus by John Williams, (c1972) NYRB 2014
a biography of Augustus, a history of the founding of the Roman Empire, a subtle study of power and politics – all in the form of an epistolary novel; an extraordinary accomplishment

In Translation, Translators On Their Work And What It Means edited by Esther Allen and Susan Bernofsky, Columbia University Press 2013
some essays were on technical topics but there was much for the general reader interested in the history, issues, and challenges of translation

A Brief History Of Motion: From the Wheel, to the Car, to What Comes Next by Tom Standage, Bloomsbury 2021
title says it all; engaging style, lively anecdotes, cautionary observations about the unforseen consequences of technology and good intentions

The Meaning Of Travel by Emily Thomas, Oxford Univ. Press 2020
a pleasurable tour with “philosophers abroad”, contemplates the who and why of travel and what we think of where we’ve been

Winter in Sokcho by Elisa Shua Dusapin, translated from the French by Aneesa Abbas Higgins; (c2016) Daunt Books 2020/Open Letter 2021
award winner for translation; language both spare and unsparing in description; enigmatic storyof borders and uncertain identities, its tone as cold as the weather in the shabby out-of-season resort town

Dancing On The Ropes, Translators and the Balance of History by Anna Aslanyan, Profile Books 2021
entertaining stories of the role of translators/interpreters in history illustrate the challenges and philosophies of cross-language communication 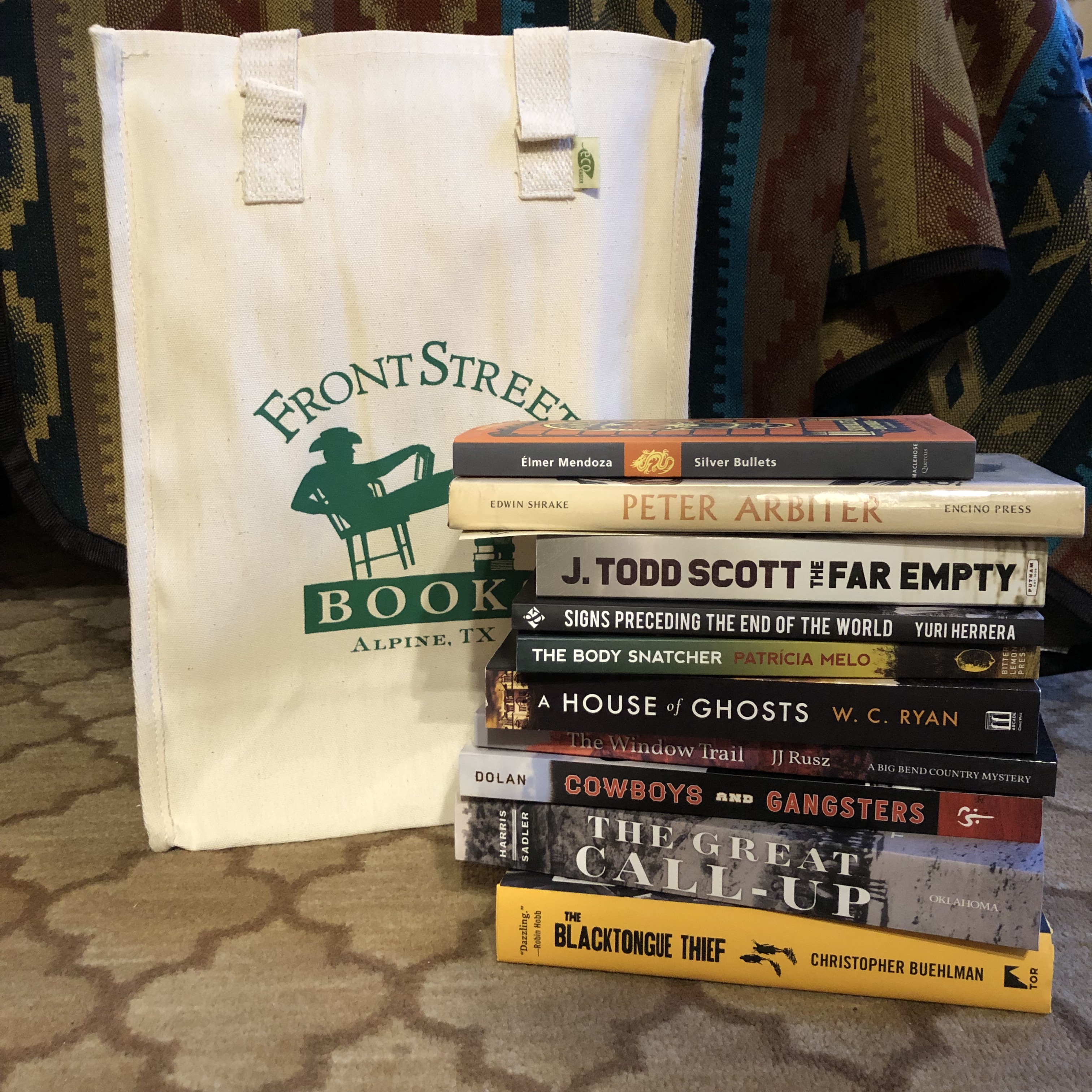 Front Street Books in Alpine, Texas – as nice a small town bookstore as you’ll ever find. The stock is thoughtfully chosen with a strong but not exclusive emphasis on the local history and literature. Our purchases include a collectible Texas writer, contemporary Texas writers, several very small press translated from Spanish novels, a history of the US/Mexico border in WWI, and a couple of popular genre titles. Don’t miss it when visiting Big Bend National Park! 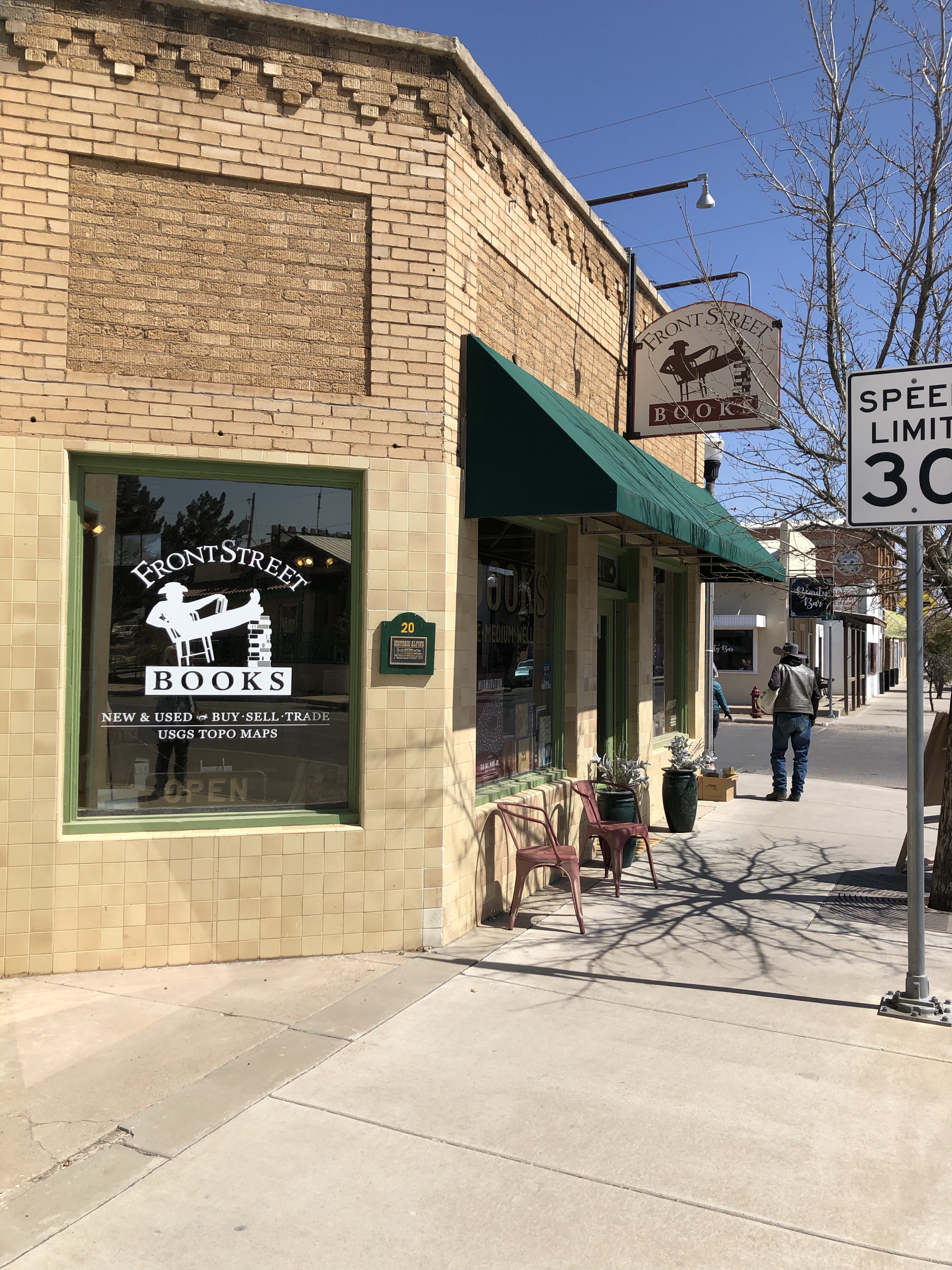 The past year may be a personal best for number of books read, at least since my childhood when I remember reading this many and more during the golden days of summer vacation. I am a little surprised at my total of 92 but will attribute it to one part motivation to reduce the mighty stacks of to-be-reads and one part blinkered escape from the world.

Here’s how it sorts out. I read about the same number non-fiction as last year with 26. The novels added up to 66. There were 22 books translated from other languages into English. Atypically for me, a little more than half my list had been published (either new or in the English translation) since 2015. That reflects the pandemic buying binge to support bookstores creating the afore-mentioned mighty stacks.

It’s very gratifying to review my reading list and see so many very good, satisfying, well written titles. My 10 Best list feels a little arbitrary. Several were easy picks but others might have been different another day. So here is my list of ten plus a few. I don’t claim that I chose the best, but these are ones I most enjoyed.

China In Ten Words by YU Hua (translated from the Chinese)
Fire & Brimstone: The North Butte Mining Disaster 1917 by Michael Punke
Hokkaido Highway Blues: Hitchiking Japan by Will Ferguson
A Stranger To Myself, The Inhumanity of War: Russia 1941-1944 by Willy Peter Reese (translated from German)

The Distance by Eddie Muller

To endeavour to get the better of the intrusions of indolence of mind and body, those certain harbingers of enfeebling age. Rather to wear out than to rust out. To rise early; and, as often as possible, to go to bed before mid-night…not to indulge repose too frequently on the couch in the day. Not to give up walking

To continue the practice of reading — pursued for more than fifty years, in books on all subjects; for variety is the salt of the mind as well as of life. Other people’s thoughts, like the best conversation of one’s companions, are generally better and more agreeable than one’s own.

To admit every cheerful ray of sunshine on the imagination.

Not to give the reins to constitutional impatience, for it is apt to hurry on the first expressions into the indecency of swearing. If one cannot be a stoic, in bearing and forbearing on every trying occasion, yet it may not be impossible to pull the check-firing against the moroseness of spleen or the impetuosity of peevishness.

To be always doing of something, and to have something to do.

When craft, patience, and a love of books come together.

Life? Quite possibly. Poetry? Most definitely. Poetry in motion, sure, but also as words on a page.

Empty baseball field
–A robin,
Hops along the bench

More than two hundred delightful examples of baseball poetry are collected in Baseball Haiku, edited by Cor van den Heuvel and Nanae Tamura. A short informative essay introduces the major poets in the development of modern haiku in both Japan and America and suggests some of the natural affinity shared by baseball and haiku, each having a connection with Nature and a focus on the individual moment. Each of the poets is introduced with notes about his poetry and interest in baseball.

walking home
with his glove on his head
shrieking cicadas

handsome pitcher
my eyes drift down
to the mound

The apparent simplicity of Haiku is notoriously tempting to the poetry rookie. Who can resist the temptation to try one?

The Passenger by Ulrich Alexander Boschwitz is another forgotten novel having a belated popular success. The Deutsche Welle news site gives an interesting back story to the novel’s creation and rediscovery.

One has to wonder at and admire the determination of small publishers everywhere who continue to bring fresh voices and viewpoints to the marketplace. How boring would it be to see only mass market titles in your favorite bookstore? Readers unite! Show your appreciation, take a chance on an unknown author. Go to that favorite (independent one, I hope) bookstore in person or online and buy a small-press book today!

When I really want to make time I take off my glasses and let the text blur as the pages flip by. Collating the scores of volumes of The Gentleman’s Magazine could absorb much too much time if I let my eyes stop at every intriguing heading or story. It was the original “magazine”, (the editor appropriated the French word for “storehouse”) founded in 1731 as a digest of everything an educated man might want to know about. Original contributions and excerpts from other periodicals and books cover the political, scientific, and military news, poetry and publishing, the stock market, births and deaths, natural history, letters from readers, engravings, etc. etc. Every issue is packed with temptation for the curious, and, of course, I often succumb.

My project is to review each volume for any damage or loss before offering the set for sale through my Library’s online store. A few years before my retirement, the Library decided to deaccession a huge number of old periodicals. Why many (like TGM) were ever made part of a public library collection remains a mystery, but I was determined to rescue as many as possible from the dumpster and put them into our store. Even the most intresting and historically important periodicals are a slow sell, though, and they mostly sat in storage waiting for attention – a classic someday project.

A grand project for a volunteer in other words. Now I can give them that time and attention, and there’s no guilt if I let myself get distracted from time to time by a report on the troubles in the colonies or an engraving of a very toothy hippopotamus or a funny news story.

The ship Phoenix, from London to Gainsbrough, was unfortunately set on fire by a cinder’s falling on a cat in the cabin, and the cat’s running frighted into the half-deck, where was stowed a quantity of hemp, which instantly burst into a flame, and, more than 20 barrels of powder being on board, so intimidated the ship’s company, that they quitted the vessel, to preserve their lives, and soon after she blew up.